Why do we call dressers, Welsh Dressers?

In some ways it is an obvious explanation, but even so, many people still often call dressers from England, Scotland, America etc Welsh Dressers.

I can see why people have become accustomed to calling most dressers ‘Welsh Dressers’, as sometimes the differences are not always obvious to the untrained eye. That’s why the information I found that seemed to be the most accurate were from antique websites.

Calling them Welsh Dressers also conjures up romantic images of farm house kitchens in beautiful cottages somewhere in a peaceful Welsh valley, so with such a strong image, it’s no wonder we hold on to the name. 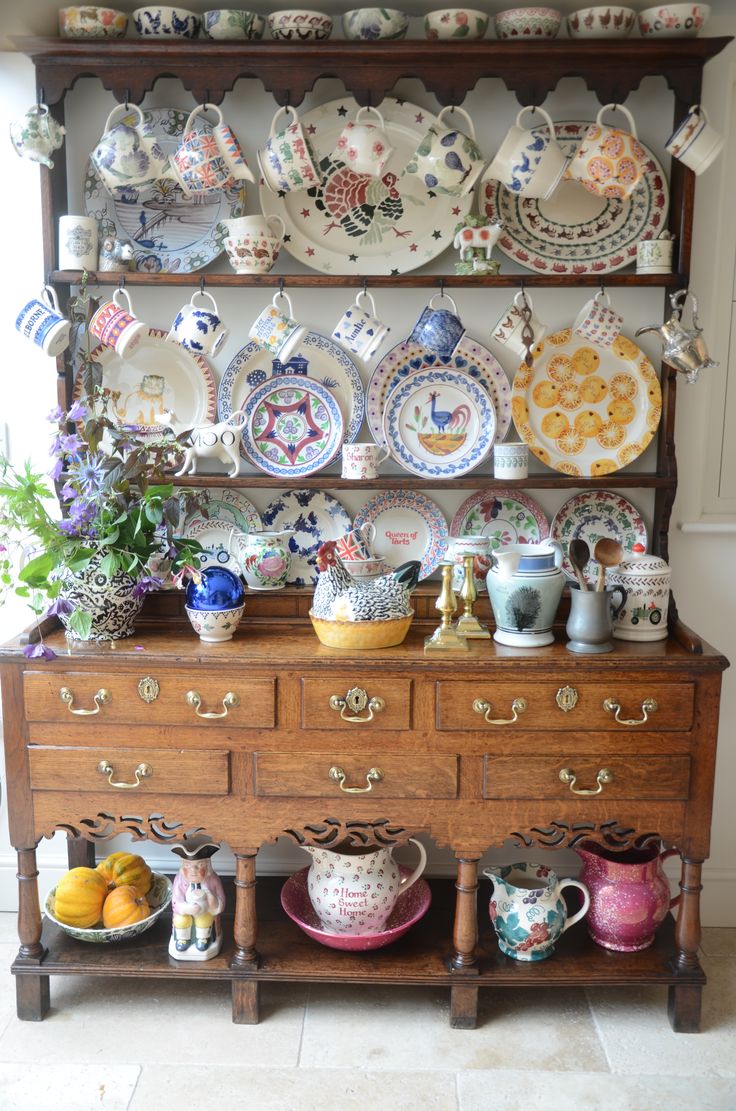 If your looking to purchase an original antique Welsh Dresser, I would definitely do your research first. I noted from reading articles on antique sites that the type of wood is important, for example most are made of oak, as it was a tree that grew locally, was easier to work with and a stronger lasting wood.

Welsh Dressers were an item of furniture that took pride of place in many Welsh homes. A lot of time and effort would have been spent keeping them in good condition. This was achieved by regularly rubbing beeswax into the surface of the wood to form a patena.

A patena is the combination of the beeswax and naturally forming dirt and smoke upon the oak Welsh Dresser, being rubbed into the wood. The patena not only provided the dresser with a protective layer, but produced over possibly 200 years a warmth and colour to the wood that is highly sort after to this day.

From what I can tell, this is not something that can be easily mimicked and if you were looking for an antique something to be very aware of, along with a number of other issues for example the type of wood, the condition the dresser is in, whether the dresser and shelves match and the overall style.

According to the source of this image, this is an antique North Wales/ Anglesey Dresser.

It does seem to have the features as mentioned by Helen Meserve below. Hooded Cornice, cupboards & draws within the base and made of oak, but the shelves do not seem particularly deep.

That doesn’t mean the source is incorrect, i’m sure they know a lot more about Welch Dressers than I, but it is a great deal of fun trying to work out which one is which.

According to Helen Meserve, whom I feel was my greatest source of information for this article, noted that North Wales Dressers have particular features:

“A typical 18th century NWales dresser is enclosed meaning it has a superstructure of shelves with a wooden back, over a cupboard base. It is made of fine timber and joinery. The hooded rack, is typical of the north, with deep shelves to hold not only plates but also tea sets and pitchers, with additional iron hooks for mugs and jugs”.

“The base will have two or three drawers over two cupboards with fielded or shaped panels. These dressers are rarely over five feet wide and seven feet high, to accommodate the low ceilings and small rooms in a Welsh farmhouse.”

Image Source
I’m not an expert, but from what I have read this one looks a lot like a South Wales Dresser, as it is made of oak, has scalloped edges and open pot boards at the bottom. Plus the shelving width looks a bit thinner, hence the dishes resting against the back of the dresser, rather than being stacked up on the shelves. In it’s day the Welsh Dresser was not only famed for it’s quality craftsmanship, but for it’s added embellishments for example the scallops. An English Dresser of the time was considered in comparison to look quite plain.

Image Source
The Welsh Dresser served as not only a food preparation area, but a storage area for pewter and crockery. The blue and white crockery above has become a very popular colour and style of crockery over the years.